My son is crazy about Thomas the Train.  I mean c-r-a-z-y.  So naturally he decided to have a train party! It was pretty fun to put together, actually!

Here's some of the highlights:

I made a few railroad crossing signs out of some balsa wood pieces I got at the craft store. Then, I picked up a Christmas tree box from work and turned it into "Gordon - the number 4 blue engine"!

Two to three boys could run around in him at one time!  It was great!   There is a space in the back to carry things, and a funnel to stuff toys into as well - super fun! I just cut the box, taped pieces here and there, and then covered it in blue wrapping paper. The details were made with thin electrical tape.  and I drew the face then stuck him on! Easy peasy. 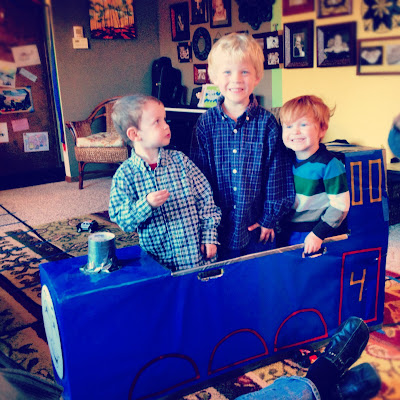 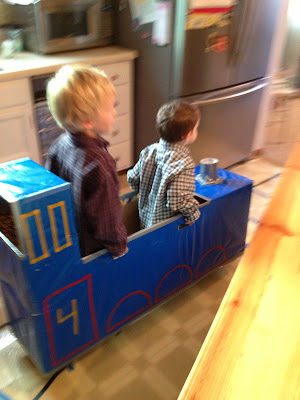 To go along with Gordon, I decided he needed a track on the floor!  Now, in hindsight - I would not have used electrical tape.  No one tells me these things until afterward when the men are buzzing around saying things like "I hope that comes up" or "That's going to ruin the carpet" or "I wonder how much residue that's going to leave on the floor"  Ofcourse, they couldn't say all of those thoughts while I'm putting the tape down right. in. front. of. them. The blue painters tape was not a problem, and honestly, the electrical tape wasn't a problem either, except that if left longer it could have really messed my carpet up. So, use painters tape. NOT electrical tape, as I did.   But put down a track because it's super cute! 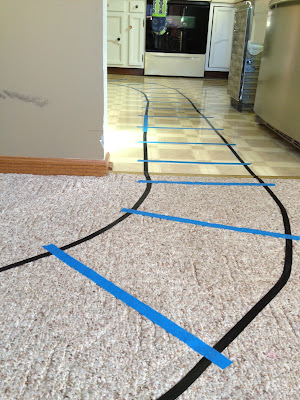 We also had a table full of coloring pages for the boys.  It didn't see much action since there were trains to play with, food to eat, and races to be had.  But it was used occasionally, I think as a resting spot.  It worked :) 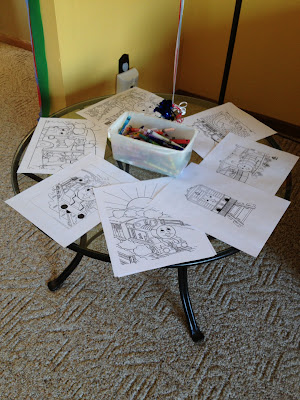 Now, the real fun was had at the table!


I made tracks on the table as well as on the floor - only here I KNEW only to use masking tape.  ;)

I also used one of  L's paper train mats as the centerpiece of the table and added Trains and train cars that I made from Little Debbie Swiss Cake Rolls, miniature Reese cups, miniature 3-musketeers, miniature Oreos, and candy melts. Really easy. The thing that was so cute, though, was the silver curly ribbon 'steam' coming out of the funnel! 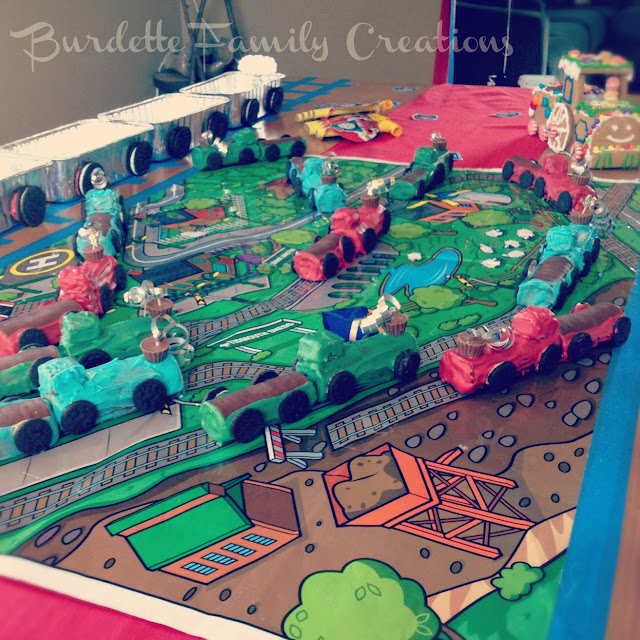 I saw this idea somewhere and had a heck of a time finding loaf pans this time of year!  But I was persistent and it paid off - look how cute!  I love the Oreo wheels :) And they are just the right size for our big Percy flashlight and remote control Thomas! 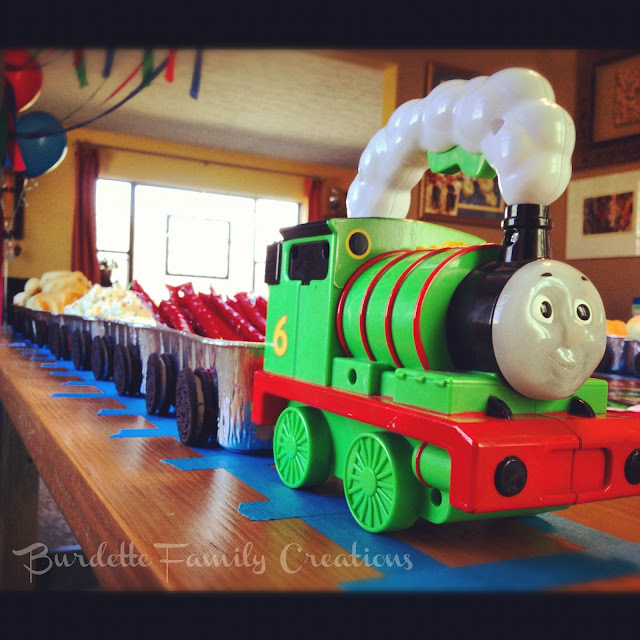 Mmmmm....train cars full of favorites!!  (The pretzel rods look like 'Jobe wood' - if you've got a bit of Thomas brain like I have now, you'll know what I mean! Haha!) 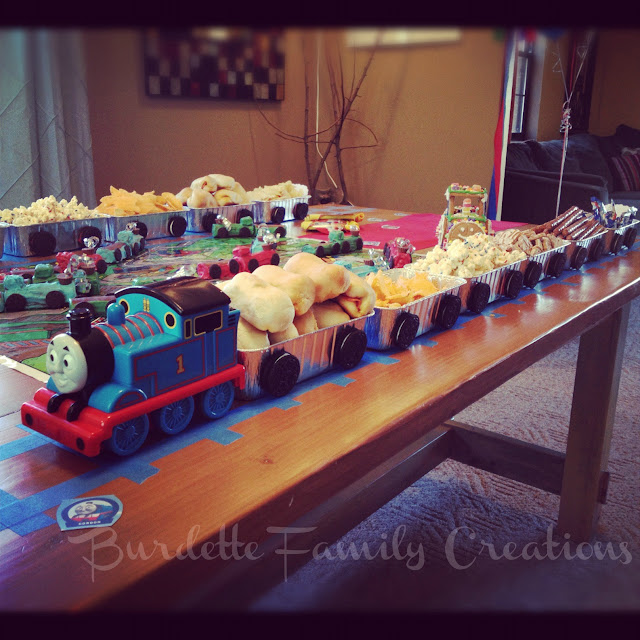 I could have gone over the top with the cake, like some of the masterpieces floating around on the internet, but I just didn't have time, and frankly I don't love cutting cake! It's always such a mess. I like our cupcakes, though, and everyone was happy! The cupcake toppers were easy to make with some images online and toothpicks :) 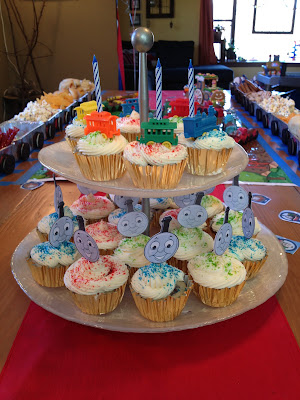 Table pre-drinks and by the way - how convenient was it that we happened to decorate a gingerbread train a couple days before!? 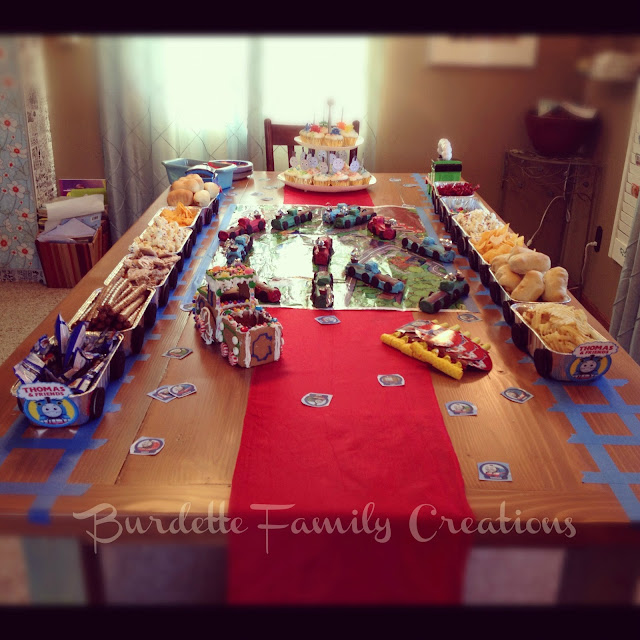 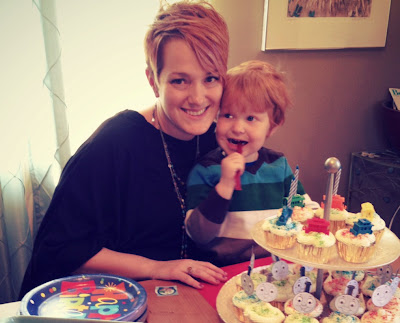 We're a new, family blog, and just getting the hang of it!
Thanks for stopping by and come back to visit again as we will slowly start posting our creations!